At GP of Emilia Romagna a few crashes and a bit of unluck affected the weekend of Renaux. The French finished 9th overall but he kept the third position in the General Classification. Jacobi entered the points area in both races and he stayed in the Top 20 of the GC of the Championship.

The third and last appointment of three rounds that took place at Faenza circuit, this time called GP of Emilia Romagna, was disputed during the second weekend of September and it was valid for the 8th round of the season of the FIM Motocross World Championship, in which Maxime Renaux #959 and Henry Jacobi #29 were the riders deployed by Team SM Action Yamaha.

On the technical and hard surface of “Monte Coralli” track, Sunday’s practices smiled to Renaux, who was fast straight away with the 2nd place in Free Practice and the 3rd place in Timed Practice, despite a bad crash that involved the French rider in the final phases. Luckily he was able to take part to the race. In the Top class the German Jacobi did not find the right feeling with the circuit and after the 21st place in Free Practice he improved a little in Timed Practice, in which he finished 17th. 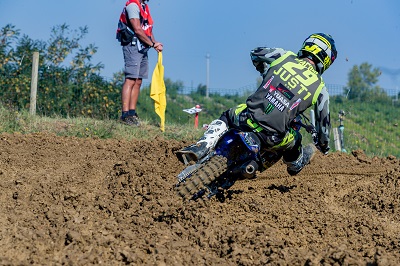 In late morning the riders went to the starting gate for Race 1. In the MX2 Maxime start was not the best one but during the first lap he was shrewd to take the 5th place. His recovery was unceasing and after that he closed the gap to the riders in front he gained 3rd place at lap 8. After two laps though, while he was trying to close the gap from the 2nd, the French fell off twice in the same lap and he totally compromised the result of his race. After 17 laps he finished in 17th place. In the afternoon, in Race 2, Maxime was 6th after lap 1 and he seemed to be ready to move up as he did in Race 1. During the central part of the race he settled down in 8th place though, and due to a small technical issue he was also forced to move to the 9th place in the last part of the race. At the end of the day Maxime finished 9th overall but despite the not satisfying result he kept the 3rd place in the General Classification.

In the top class, Race 1 start for Henry was not the best and he passed by the finish line of lap 1 in 17th position. His race, though, was constant and without mistakes, so after 17 laps Jacobi finished in the Top 20 in 16th place. In the afternoon, Race 2 start for the German was much better than the previous one and his Yamaha #29 passed in 10th position after lap 1. Unfortunately, his pace was not fast enough to stay in the Top 10 so Henry moved back lap by lap and he finished the race in 17th place. His weekend ended with the 15th position overall and he stayed 19th in the General Classification.

Now the Motocross World Championship will take one week of break. On the weekend of the 26th and the 27th of September, then, another three rounds in-a-row will take place in Italy, at Mantua circuit, for the GP of Lombardia, the GP of the City of Modena and the GP of Europe.

Maxime Renaux #959: “This weekend went bad! I had a good pace throughout the day, but two crashes in the first heat and a mechanical problem in the second affected my final result. I can't wait to get back on track in Mantua."