Very positive weekend in Holland for Team SM Action Yamaha. At Valkenswaard, excellent performances for Renaux  and Adamo, as they jumped on the podium in their categories. Jacobi had a weekend that has to be forgotten.

After the first round in England, the motocross circus moved to Holland, on another historical track, Valkenswaard.

After the heavy rain that dropped in the middle of the week, on Saturday the surface looked a lot muddy in the first hours of the morning, but then it dried out well and it was optimal in the afternoon. 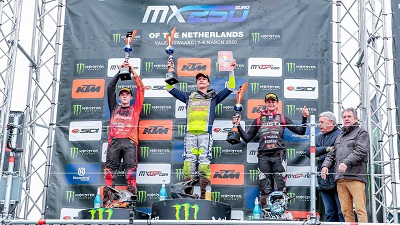 After a very good Qualifying Race, where he finished 4th in his group, Andrea Adamo went to the starting gate in 8th place. In Race 1, his jump out of the gate was good and he was straight away in 9th place. For the whole race Adamo kept the pace of the ‘top 10’s, and, after an overtake when there were two laps to go, he gained the 8th place. On Sunday, in Race 2, Andrea’s performance was superlative. After a great start he was 3rd, then he made an overtake before the end of lap 1 and he kept the 2nd place with authority for 5 laps. Despite of an insidious surface, Andrea rode his bike without making any mistakes and at the checkered flag he was in 4th place. The penalty that occurred to the winner (who did not see the yellow flags during the race) made him finish in 3rd place, which equaled to his first podium of the season. Andrea finished in 3rd place overall, and he is now in 3rd place too in the General Classification of the Chamionship, so his 2020 season could not have started in a better way! 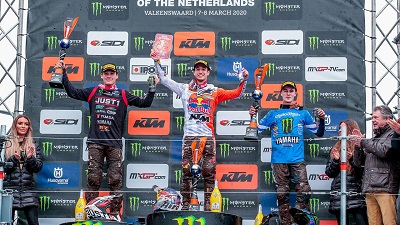 In the MX2 Maxime Renaux finished the Timed Practice in 11th place. In Qualifying Race Maxime had a good start and he was straight away close to the leading group, so he kept that place until the end of the race, which he finished in 6th place. On Sunday, Race 1  for Maxime went perfectly. After a sensational start he was in 3rd place, and then the French took the 2nd. During lap 6 he was overtaken but his race pace allowed him to finish in 3rd position. In Race 2 Maxime made again a good start and he was in 3rd place. During lap 2 he slipped a little bit but his recovery was constant and and at the checkered flag Renaux was again in 3rd position, which allowed him to finish in 2nd place overall in the day. In the General Classificiation, Team SM Action Yamaha rider gained seven places and he is now 4th.

In the Top Class, Henry Jacobi did not shine during Timed Practice, as he was 23rd. In Qualifying Race, though, the German started well and he was 12th straight away, and then he moved to the 14th place. Good luck was not with him unfortunately, and during lap 5 he fell off after a contact with another rider, so he found himself in 20th place. With a lot of grit he moved up to the 17th position. On Sunday, bad luck showed up again for Henry. In Race 1,  during lap 1, the German had a contact with a rider while he was in the ‘top 10’ and he crashed. He then restarted in the back of the group, he tried to recover but another slip made him going to retire. In Race 2 the result was similar to the previous race. After a good start, when he was in the ‘top 20’, he was forced to retire at lap 7. After a double zero in the overall classification, he is now in 14th position in the General Classification.

The third round of the FIM Motocross World Championship will take place in Patagonia (Argentina) at the beautiful circuit of Neuquen. The designed weekend is the one of the 21st and 22nd of March. 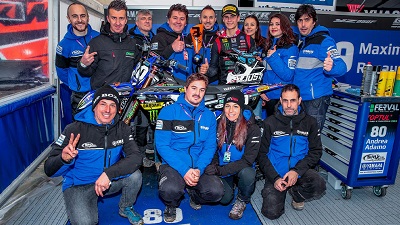