IM Motocross World Championship went to England for the second round of the season. At Matterley Basin Horgmo had two excellent races that rewarded him the podium in 2nd place in the EMX250. Hard weekend for both Adamo in the MX2 and Forato in the MXGP.
After the round in Orlyonok, FIM Motocross World Championship moved to England at the beautiful and very fast circuit of Matterley Basin to race for the second round of the 2021 season. For this occasion, the EMX250 Championship riders were in there too to open their agonistic season. 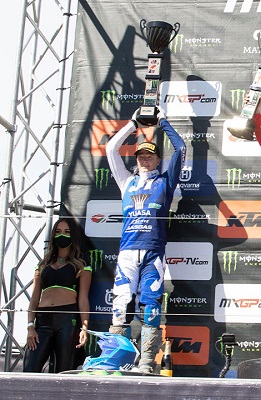 SM Action GasGas Racing Team Yuasa Battery deployed all of its riders: the Norwegian Kevin Horgmo #24 in the EMX250 Championship and the Italians Andrea Adamo #80 and Alberto Forato #303 respectively in MX2 and in MXGP classes. Alberto made his debut in the 2021 World Championship as he was back from a long time of recovery from an injury.
As it was in the past year, Saturday was scheduled to be the day of the minor classes, so it was Horgmo to be the first of the Team to try the surface of the long circuit of Matterley Basin. In Free Practice Kevin made the 2nd fastest lap time of group 1, and he improved in Timed Practice as he was the fastest of his group, gaining the 2nd overall place at the starting gate.
After the lunch pause, the riders lined up in the afternoon to start Race 1. Kevin had a great start and after the end of lap 1, he was 6th. His progression to the top was firm and consistent for the whole race and at the checkered flag, after 12 laps, Horgmo crossed the line in an excellent 3rd place. 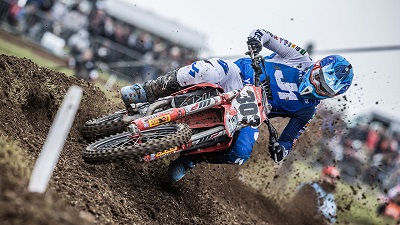 In Race 2 Kevin gained the 3rd position straight away, and during lap 2 he moved up to 2nd. He then followed the trail of the leader and he confirmed 2nd place at the finish line. At the end of the day, the good result was confirmed by his 2nd place Overall, so he started in the best possible way his adventure in the 2021 EMX250 Championship.
In the MX2 Andrea started his weekend with 26th place in Free Practice, with a lap time that he improved a little during Timed Practice as he finished 22nd. In Race 1 the start allowed Andrea to gain the 9th position but a crash during lap 2 forced him to move back to the margins of the “top 20”. He then finished the race in 18th place. In Race 2 Andrea had a worse start as he found himself in 14th position. For the whole central part of the race, the GasGas rider was firm in 15th place but when there were a few laps to the end he made a couple of overtakes and he finished 13th. His GP of England ended in 16th place Overall, a result that was not really satisfying as he moved back to one position in the General Classification, where he is now 14th. 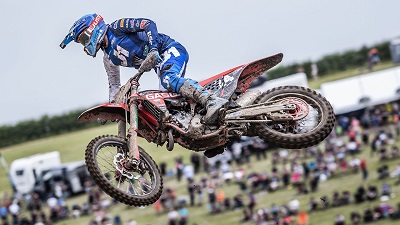 In the MXGP Alberto did not have good performances too, as he was still suffering from the long stop due to the injury at his knee. After that he made the 28th fastest lap time in Free Practice, Forato ended Timed Practice in 32nd position. His starting gate was then far away from the ideal starting trajectory, so Alberto was in the back of the group in both races, and his whole day passed by in the last positions. At the end of the day, he was 31st Overall.
The third round of the FIM Motocross World Championship will take place in Italy on the weekend of the 3rd and the 4th of July. The track that will host the event will be the historical Maggiora circuit, in the Province of Novara. The EMX250 Championship will instead have its second round on the weekend of the 17th and the 18th of July when the World Championship will go to Holland on the dusty circuit of Oss.

Kevin Horgmo #24: “In Race 2 I had a better start but, as happened in the Italian Championship, I struggled to recover to Lapucci, even though I’m still gaining. After all, I’m happy for my result and I’m happy to be back on the podium after the difficult past season”.

Andrea Adamo #80: “Unluckily in Race 1 I made contact with another rider and I moved back to 18th place. In Race 2 I was not that fast while overtaking and the top riders group moved away. Consequently, I finished 13th. I will try to improve in Holland”.