Convincing performances for Adamo and Horgmo at the GP of Italy at Maggiora, the third round of the FIM Motocross World Championship season. The Italian was fast and solid and at the end of the day was just shy of the “top 10”; the Norwegian made some mistakes and finished 15th. In MXGP Forato improved but still did not make it to the “top 20”.

Accordingly to the schedule, as the EMX250 Championship was not there, the Norwegian Kevin Horgmo #240 decided to take sides in the MX2. On Sunday morning Kevin, after the 22nd position in Free Practice, gained 12th place in Qualifying. Andrea Adamo #80, in MX2 too, made the 20th fastest lap time in Free Practice and gained the same position in Quali. Alberto, in MXGP, conquered 19th place in Free Practice but was not able to repeat himself in Timed Practice, as he finished out of the “top 20” in 23rd position. 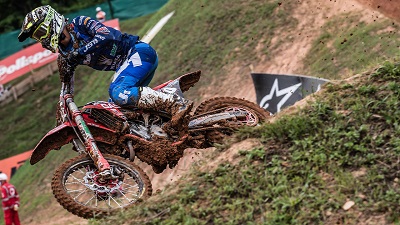 SM Action GasGas Racing Team Yuasa Battery riders made a good start at the beginning of MX2 Race 1, as they entered the “top 20” by the end of lap 1: Horgmo was 11th and Andrea was 16th. While Adamo conducted a regular race and gained the final 13th position after keeping a good pace, Kevin made a mistake at lap 2 and moved back to 19th place, vanishing the good start. He was then forced to recover and after 18 laps Horgmo passed by the finish line in 14th place, just behind his teammate.

In MX1 Race 1, the placement at the starting gate did not ease Alberto’s start, as he was in the back of the group, in 29th position, by the end of lap 1. The comeback of Forato was not very steady and he passed by the checkered flag with his GasGas #303 in 25th place. 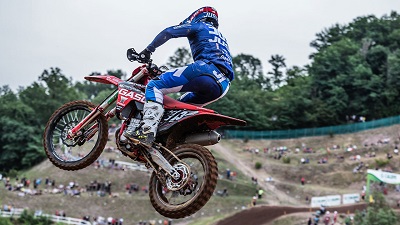 Race 2 start was not much different from the previous one for Kevin and Andrea. The riders of the MX2 started well and after lap 1 they were respectively in 12th and 16th place. As it happened in Race 1, Andrea managed to be consistent, avoiding mistakes and making a good move to gain 10th place, which is an excellent result for him. Kevin had more up and down moments instead, and between small mistakes and little recoveries, the Norwegian closed the race in 16th position. At the end of the day, Andrea was 11th and he gained one position in the General Classification, as he is now 13th; Kevin made it to the 15th final position and he is now 22nd in the GC. 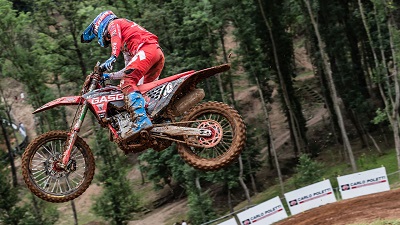 The start of Race 2, in MXGP, coincided with the arrival of the rain, which fell heavily on the track during the first laps of the race. Alberto made his move to 23rd place after lap 1 but then, while he was furiously moving up (he was 20th), he made a mistake and moved back. He did not give up but he had to make it all again, on a surface that was muddy and insidious, and he finished Race 2 in 21st place. At the end of the day, he closed in 25th position but the rider from Veneto did not enter the points area for the second consecutive round.

The FIM Motocross World Championship will be back on the weekend of the 17th and the 18th of July for the MXGP of the Netherlands, which will take place at the new Oss circuit. On that occasion, the riders of the EMX250 will be back on track too for the second round of their season.

Alberto Forato # 303: “This round of Maggiora went better for me than the first. We are working well and making progress. In qualifying, I was two seconds behind the leaders so I feel satisfied. Regarding the heats, in race 1 I struggled a little in the first laps and when I found the right place, the others were far away. In race 2 the track became very slippery due to the rain but I had a good pace. Too bad I was unable to make it into the 'top 20'. We keep working and for the next race, we will certainly be more competitive. "