The fourth round of the FIM Motocross World Championship takes place on the Dutch circuit of Oss. In MX2 Adamo is penalized by two errors but hits the points in both fractions; in MXGP another weekend outside the 'top 20' in Forato. In the EMX250 Championship, Horgmo retains the second position in the championship thanks to the fifth-place of the day.

For the fourth round of the season, the FIM Motocross World Championship moves to northern Europe, specifically to the Netherlands, for the MXGP of the Netherlands. After many years of absence, the world championship returns to the Oss track, traced by the typical soft sand on the surface but with a rather hard and compact bottom.

With the presence of the EMX250 Championship alongside the MXGP and MX2 classes, the SM Action GasGas Racing Team Yuasa Battery is complete with Kevin Horgmo # 240 (EMX250), Andrea Adamo # 80 (MX2), and Alberto Forato # 303 (MXGP ). 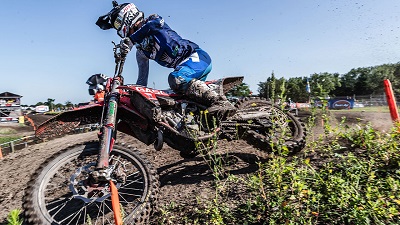 On Saturday, it is the young Europeans who take to the track. In free practice, Kevin immediately proves to be very fast and hits the 1st time in his group. In the following timed sessions, the Norwegian confirms himself at the head of the group and on the starting grid, wins the 2nd gate.

In the first heat, the start sees the GasGas driver occupy the 1st position but after a crash, the Norwegian finds himself 7th. In the remaining laps, Horgmo goes up through the group thanks to a constant comeback that gives him 3rd place. In the second heat, the start is not perfect and Kevin is forced once again to recover. The final result sees the Norwegian complete the race with 5th place. At the end of the day, Horgmo is 5th in the standings while in the general standings, Kevin keeps his 2nd position, stretching on the direct rival but also losing a few points towards the provisional leader. 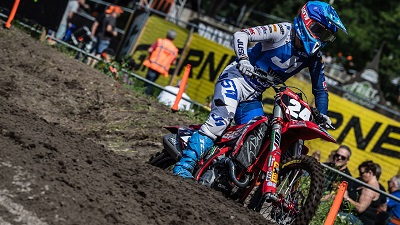 On Sunday, the first heat of MX2 sees Adamo hit a good start and immediately stabilize within the 'top 10'. During the second lap, however, the Italian makes a mistake and slips to 18th place. His race, trying to make up for the mistake, ends with 15th place. In race 2, luck is once again not on the side of the Italian. At the start, Andrea falls and in a hurry to leave, he falls again. Starting last, he makes a spectacular comeback and finishes 18th. At the end of the day, he finds himself 17th in the standings and the nine points won place him in 14th place in the general standings.

In MXGP, Alberto's first heat takes place entirely outside the 'top 20'. After the start, the Italian finds himself 25th and in the following laps, he retreats a few positions until he finds himself 28th. From the seventh lap onwards, Alberto finds the right place and after a long and tiring comeback lasting ten laps, he closes the heat with 21st place. In the second heat, Forato is immediately close to the 'top 20' at the end of the first lap but his race pace does not allow him to hold the position. With a fluctuating pace, he faces 20th place for just three laps, then drops and is forced to give up some positions, finding himself 24th on the finish line. At the end of the day, he is credited with 27th place. 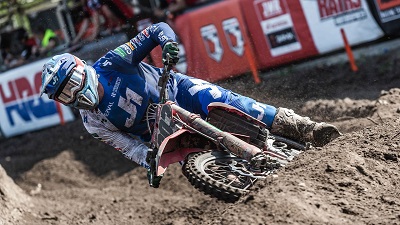 Andrea Adamo # 80: “The day went like this and so, the result was not as I wanted. In the race, I had a good pace and good speed. Unfortunately in race 1 after a good start, I crashed. In race 2 I crashed at the start, twice within a few meters. I started last and far from the group and I recovered well. Too bad because without crashes I could have closed both heats close to the 'top 10', instead we go home with a bad result. Now a couple of days of training and then we will move to Loket for the next GP. "

Alberto Forato # 303: "It was a very hard weekend, the track was very pitted and dug but at the same time beautiful. Again, for a very short time, I stayed out of the points but we continue to work trying to achieve this goal as early as the next race. Today it was also very hot and I suffered a lot. However, we are working well and the first results will certainly arrive."