The 2021 edition of the GP of the Czech Republic has been raced at Loket. In MX2, despite a few mistakes, Adamo and Horgmo entered in the points area and stayed in the “top 20”. Forato interrupted the series of less satisfying results as he gained his first championship points in Race 2.

After the Dutch GP of Oss, teams, and riders traveled to the Czech Republic for the fifth round of the FIM Motocross World Championship season, which was hosted at Loket circuit, a track that is traditional and has a medium-hard surface.

SM Action GasGas Racing Team Yuasa Battery, other than the two riders Andrea Adamo #80 (MX2) and Alberto Forato #303 (MXGP), also deployed Kevin Horgmo #240 in MX2, as he was not engaged with the EMX250 Championship.

In the usual Timed Practice of Sunday morning, which decides the starting gate placement, in MX2 Adamo made the 20th fastest lap time while the Norwegian Horgmo was ahead of him in 14th place. In the MXGP Alberto did not make it better than the 18th position. 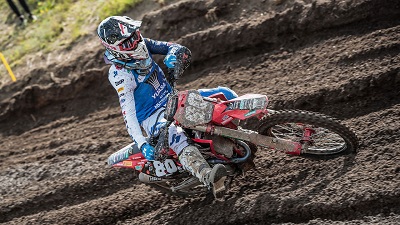 At the end of the morning, the MX2 had its Race 1. Adamo started very well and he gained 5th place straight away, but he quickly lost positions and after lap 1 he passed by the finish line in 11th. Kevin, instead, did not have a good start and by the end of lap 1, he was 19th. While Andrea had a regular race and avoided mistakes, finishing the race in P13, Kevin made a mistake during lap 5 and he moved back to the 25th position. He recovered until the 22nd place at the checkered flag.

In MX2 Race 2, which started under the rain, Andrea did not repeat the good start of Race 1, and together with his teammate Kevin they were at the margins of the “top 20”. Both riders committed straight away for a furious comeback but this time was Andrea who made a mistake on that insidious track surface. The Italian slipped during lap 6 while he was 21st and he moved back to P28. His race, between a lot of issues, finished only four laps after, when he was forced to retire. Kevin, instead, managed to be constantly moving up and when there were 3 laps to go he made it to 12th place. At the end of the day, Andrea was 18th Overall while Kevin was just ahead of him in 17th. In the General Classification, the Italian lost a place and he is now 15th, while the Norwegian, who is not often racing in the MX2 class, is now 22nd. 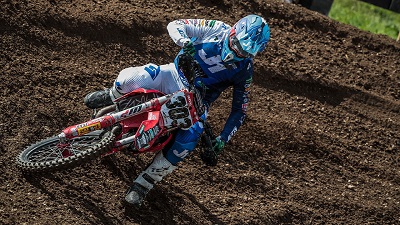 In MXGP Race 1, Alberto was always in the back of the group. The rider from Veneto was out of the “top 20” after lap 1 and at the checkered flag, he was 23rd. In Race 2, instead, he turned the day in his favor. After a good start, Alberto positioned inside of the “top 20” and even though he had a few difficult moments in the starting laps, he had a good pace and he moved up all the places that he previously lost, so he finished the race gaining his first points of the 2021 season. Thanks to his 14th place in Race 2, at the end of the day Alberto classified 19th Overall and he entered the General Classification in 26th place.

FIM Motocross World Championship will continue with the GP of Belgium, which will be the sixth appointment of the season, next weekend at the circuit of Lommel.

Andrea Adamo #80: “It was a difficult weekend. In Race 1 I had a good start but a series of mistakes made me move back to 13th place. In Race 2, instead, I had a bad start and on top of that I crashed, so I was forced to retire. It didn’t go as I expected but I’m already thinking about Lommel, to forget about today’s performance.”

Alberto Forato #303: "It was a weekend of ups and downs. In the morning I wasn't able to ride as I wanted and I had a bad time qualifying. In race 1 I continued to have difficulty driving while in race 2 I found a good pace and finished 14th. I finally got my first points and I hope to continue on this path. " 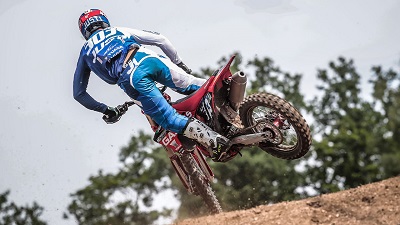