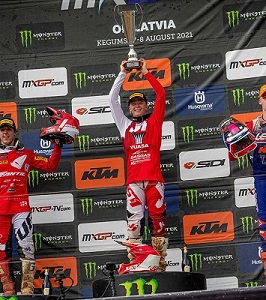 With a P1 and a P2 through the day, Horgmo won the Latvian round of Kegums, the 4th round of the EMX250 Championship. Good performances for Adamo and Forato too, which confirmed themselves closer to the “top 10” in their respective classes.

Four rounds in a row between July and August, before the long summer break, finished their series with the GP of Latvia, at Kegums circuit, which is another soft-surfaced track that requires both good technique and good athletic preparation. This weekend was also scheduled for the 4th round of the EMX250 Championship.

On Saturday, SM Action GasGas Racing Team Yuasa Battery supported the Norwegian Kevin Horgmo #240. In Free Practice Kevin did not make it better than the 10th place but in the following Timed Practice, the rider strongly improved his performance as he was 2 seconds faster on his lap time. The result was the 4th fastest lap time for Kevin, so he entered in the “top 5”. 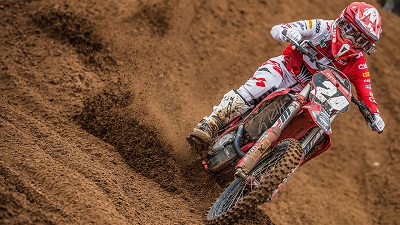 At the last part of the morning, EMX250 Championship riders aligned for the start of Race 1. Kevin made a good start and after a few corners he was 3rd, but a mistake made by a rider ahead made his move to 2nd place. With a good pace, he then put pressure on the leader of the race and when that rider slipped Kevin was there to take the lead, which he kept until the checkered flag. This was the first win of the season, and it was made with 10 seconds of the gap from the rider behind. In Race 2 Kevin made a good start again, and after turn 1 his GasGas #240 was in 3rd position. During the following laps, the Norwegian overtook the rider that was ahead of him and he gained 2nd place, keeping the position until the end of the race with a furious but solid pace. With the 1st and the 2nd place of the day, Horgmo won the first GP of his career, and he jumped to the highest step of the podium. In the General Classification, he is still 2nd with only 2 points of a gap behind the leader.

On Sunday, the riders of MX2 and MXGP had their time on track. 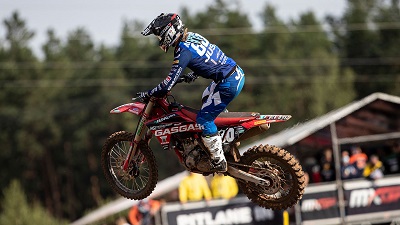 Andrea Adamo #80, in the quarter-of-liter class, finished 6th in Free Practice but he was not able to repeat the performance in Timed Practice as he qualified in 16th place for the starting gate. In Race 1 Andrea made a discrete start and he positioned straight away in P13. Thanks to a solid performance, he just touched the “top 10” and he finished in 12th position. In Race 2 Andrea had a better start and after lap 1 he was P11. After 7 laps, the Sicilian overtook the rider ahead and he entered in the “top 10”, but then he made a mistake when there were 4 laps to go and he finished 14th. With those results, he finished 13th Overall and he kept 15th place in the General Classification.

Alberto Forato #303, in the major class, was consistent with his performance and after 23rd place in Free Practice, he finished 21st in Timed Practice. The start of Race 1 saw the GasGas rider from Veneto forced to recover from 25th place. His comeback was all made in the first part of the race, as Alberto entered the “top 20” in P19. From lap 9 to the checkered flag, Alberto administered his position and he added 2 points to his Championship loot. In Race 2 Alberto had a much better start and after lap 1 he was already in the “top 20”, in P18. During the 17 laps of the race, made under a light but annoying rain that made some part of the track very slippery, Alberto made a solid comeback and he finished in an excellent 12th place. The GP of Latvia finished with P16 Overall for Alberto. He is stable in 25th place in the General Classification. 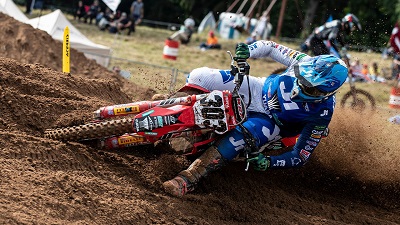 It will be needed to wait for a month for the 8th round of the 2021 season, as teams and riders of the FIM Motocross World Championship will move to Turkey at Afyonkarahisar circuit for the GP of Turkey and the GP of Afyon, with the second one that will take place in the middle of the week. The EMX250 Championship, instead, will race again on the 3rd of October for the GP of Germany, which will be hosted by the Teutschenthal circuit.

Kevin Horgmo #24: “I’m really happy with today’s result. Finally, I was able to win a race and a GP, and it’s also due to the great work of the team that allowed me to express myself at my best this year! I wanna thank everybody, the team, my coach, my mechanics...it’s a big relief when you manage to finish a weekend in a positive way and I hope I will continue with those results.”

Andrea Adamo #80: “It was a quite positive weekend! It’s a shame for the Race 2 result: when I was 10th a small mistake moved me back to P14. After all, the 13th position Overall is good. We will now have almost a month of a break before the next round so we will try to focus on what is not good to improve more and more.”

Alberto Forato # 303: “The day didn't start just as I wanted. In the morning I struggled to find a good lap in qualifying. Then in race 1, it went a little better with an 18th place in the comeback while in race 2, in the rain, I finished 12th and I'm satisfied. Now there will be a bit of a break but we will continue to work towards the resumption of the championship. "