The last round of the Prestige Championship, which took place at Fermo, delivered two medals to SM Action GasGas Racing Team Yuasa Battery in the MX2 Elite class: Horgmo classified 2nd while Adamo finished 3rd. Forato was absent in MX1.

After a long break that lasted more than a month, the Italian MX Prestige Championship went to the Marche region for the last round of the 2021 season, at the historical circuit of Monterosato in Fermo, a traditional track characterized by hard clay.

SM Action GasGas Racing Team Yuasa Battery deployed its riders in the MX2 Elite class: the Italian Alberto Forato #80 and the Norwegian Kevin Horgmo #24. The other Italian rider of the team, Alberto Forato #303, was absent in the MX1.

On Saturday, a day that was dedicated to Free and Timed Practice, the rain started to drop at the beginning of the afternoon and it worsened the surface conditions during Timed Practice. After that he made the 2nd fastest lap time of group 1 in Free Practice, Adamo finished Timed Practice in 8th place. Horgmo, which was assigned to group 2, at first was 2nd while he finished 1st in Timed Practice. At the starting gate, then, Horgmo went in 2nd place while Adamo in 13th.

On Sunday late morning, the riders of the MX2 aligned at the gates for the start of Race 1. Both Adamo and Horgmo made a good start and after the first turns, which helped the group to start splitting, the GasGas riders passed by the finish line in P3 and P5, and it took only two more laps for them to gain P2 and P3. During lap 6, they swapped positions as Horgmo overtook Adamo to gain 2nd place. In the remaining laps, the classification did not change and the SM Action GasGas Racing Team Yuasa Battery riders finished in 2nd and 3rd place.

In Race 2 Andrea made the holeshot and he entered in turn 1, after the long straight, in P1. His leadership lasted a few corners though, as in the lower part of the circuit he lost the front of his GasGas: he fell off and once he restarted he found himself in the back of the group. Kevin, instead, had a bad start and he was forced to come back from 9th place. During lap 3 Adamo chose to retire, while Kevin, fastest lap after fastest lap, made his way to the top. When there were a few laps to go, Horgmo had a big fight to gain the 4th position and he made the overtake during lap 14. With a P2 and a P4, Kevin gained the further podium of the season in 2nd place but mainly, he conquered the Silver Medal of the MX2 Elite. Adamo, who finished 7th Overall after that he retired in Race 2, lost the chance to jump onto the podium but he made it to the final 3rd place of the MX2 Elite and he won the Bronze Medal of the Championship.

Now that the 2021 season in Italy is over, SM Action GasGas Racing Team Yuasa Battery will commit itself only to the FIM Motocross World Championship, which will restart after the summer break on the weekend of the 4th and the 5th of September in Turkey, at Afyonkarahisar circuit, for the GP of Turkey, which will be the 8th round out of 18 of the calendar. 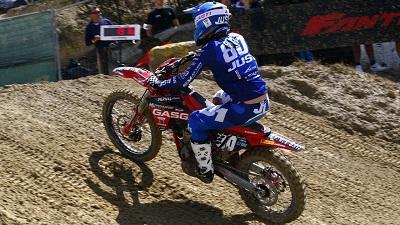 Andrea Adamo # 80: “Unfortunately the day was conditioned by a strong fever. In race 1, immediately after the start, I felt that I had no energy, I tried to manage the situation and bring home points. In the second, after a fantastic start, a pebble slipped into the front brake, making me fall before the end of the first lap and forcing me to retire. I finish 3rd in the championship and we are preparing for the next weekend in Turkey."

Kevin Horgmo # 24: “2nd and 4th for 2nd overall this weekend in Fermo and the Italian Championship. Not the best start and some tight riding in race 1, but felt better and better and climbed to 2nd. Broke the rear brake at the start of race 2, which was around 10th on lap 1. Not easy to ride without a rear brake on this track, but managed to find the flow more and more. Got up to a 4th in the end for 2nd overall on the day. Ended up 2nd in the Italian Championship, now we have some more weeks of training and focus on the rest of the season!” 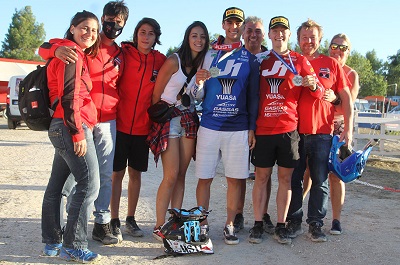