Lacapelle/Marival circuit hosted the GP of France. In the EMX250 Championship, a crash during Race 1 complicated the weekend of Horgmo, who finished P6 Overall. Improving performance for Adamo in the MX2, while Forato made a solid race as he entered in the ‘Top 10’ of the MXGP.

For Round 12 of the season, the Motocross World Championship circus moved to France, at Lacapelle-Marival circuit, a track that has a hard surface and that debuted in the World Championship this year. On Saturday, the EMX250 Championship went on track for its Round 6 of the calendar.

In Free Practice Kevin classified P10, while in Timed Practice he improved his speed and he finished in P6. Race 1 for the GasGas Norwegian started in the best way possible, as he made the ‘Holeshot’ and took the lead straight away. The positive moment, though, lasted half a lap-only; after a turn Kevin lost his rear and slipped, losing many positions. Kevin quickly jumped back on the bike, in P7, and he then stabilized and finish the race in P6. In Race 2 Kevin did not repeat his previous start but he gained a place in the ‘Top 10’, precisely in P5. As well as Race 1 Horgmo was not able to make the difference and he was forced to defend himself from the attacks of his rivals. He then finished in P6 after a lot of struggles. At the end of the day, he ranked P6 Overall while he is still in P2 in the General Classification. 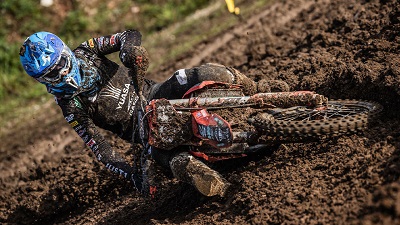 On Sunday Andrea Adamo #80 (MX2) and Alberto Forato (MXGP) had their time on track.

In Free and Timed Practice of MX2 Andrea showed confidence on the track surface, and after the P10 of Free Practice, he qualified P16. In Race 1 Andrea was not able to find his way through the field and at the end of lap 1, he passed in P17. The Sicilian could not make up many places as the circuit is narrow and offers a few chances to overtake and he finished in P13. In Race 2 Andrea had a better start, as he was in P13 after lap 1. During the 19 laps of the race, the GasGas rider managed to move up to P10, but then he slowed down a little and he finished in P12. At the end of the day, he ranked P12 Overall while he is still stable in P16 in the General Classification. 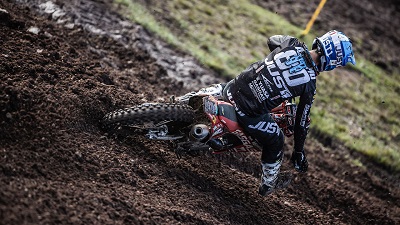 In the MXGP morning sessions, Forato made good performances. He finished in P11 in Free Practice and in P14 in the following Timed Practice. In Race 1 Alberto made a good start and he was just out of the ‘Top 10’, in P12. When there were a few laps to go Forato took advantage of a few crashes made by the riders ahead of him and he gained P10, a position that he kept until the checkered flag. In Race 2 Alberto had another good start and he gained P11 straight away. The track surface was insidious and a lot rutted, but Forato was able to avoid mistakes and at the finish line he was in P12. At the end of the day, he ranked P9 Overall and for the second time in the season, he entered in the ‘Top 10’. He also gained one position in the General Classification and he is now in P17. 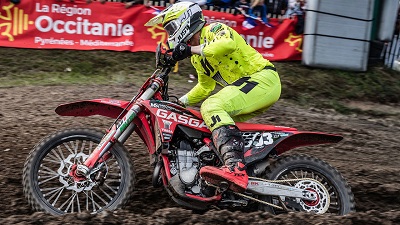 FIM Motocross World Championship will immediately move from France to Spain, at Intu Xanadu Arryomolinos circuit, as it will host the 13th round of the Championship on the weekend of the 16th and the 17th of October. The EMX250 Championship will instead stop for a couple of weeks and it will be back on the 27th and the 31st of October (with a midweek round) at the Pietramurata circuit in the Trentino region, Italy.

Kevin Horgmo #24: “I finished P6 in the races and in the Overall Classification of the European Championship here in France, and it wasn’t the best day for me...I crashed after that I took the lead of Race 1 and I struggled to ride for the rest of the day, so I have to consider myself happy with the P6 Overall gained in a bad day. We will now concentrate on the next round of the World Championship which will take place in Spain the next weekend”.

Alberto Forato # 303: "It was a good race with a good start in race 1 where I finished 10th despite a small crash and a good start also in race 2, where I finished 11th. At the end of the day, I found myself 9th overall on equal points with 8th. I am happy with the result and continue to work towards the next GP in Spain. "

Andrea Adamo # 80: "It was a good race all in all, too bad for the starts in the back. If I had started from the front, the result could have been better. Very happy with my performance in the second heat! See you in Spain "