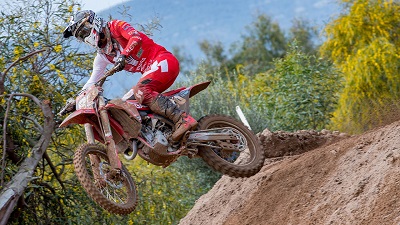 At Alghero, second round of the “Internazionali d’Italia MX”, Forato was shy of the podium in the MX2, as he finished in 4th place. Horgmo shined in the “Supercampione” race as he entered the “top 10” and finished 1st of the MX2. Bad day for Andrea Adamo.

Another awesome weekend, with sunny and springy weather, welcomed teams and riders in Alghero for the second round of the “Internazionali d’Italia MX”. The circuit named “Lazzaretto”, in Sassari province came back in this 2021 series after its last time in 2016.

With all of its riders in the MX2, Alberto Forato #303, Andrea Adamo #80 and the Norwegian Kevin Horgmo #24, SM Action GasGas Racing Team Yuasa Battery proved once again its competitiveness, but a little bit of bad luck, some mistakes and bad starts penalized the riders throughout the day.
In the morning’s Timed Practice, all the riders found the feeling on the sanded ups and downs of the track. Kevin made the 2nd fastest lap, Alberto the 4th, while Andrea was a little further back in 6th.

In the MX2 race, Andrea made a good start, as he placed himself in 6th straight away. Alberto, whose start was a bit worse, finished lap 1 in 13th place, while Kevin made it all wrong and found his place in 29th position. During the 18 laps of the race, the best performance was made by Forato, as he moved up to 3rd place with a good progression. With 3 laps to go, though, the rider from Veneto could not defend from the attacks of his opponent and he lost a position, finishing 4th and losing the podium too. Adamo, instead, made a mistake during lap 2 and he moved out of the “top 10”. In the following laps, the Sicilian moved further back, probably because of the damages made with the crash, and he took his way to the box at lap 8. Horgmo, despite his bad start, showed some good pace and his comeback finished in 12th position. In the General Classification of the MX2 Championship Alberto is 4th, Andrea is 12th and Kevin is 26th. 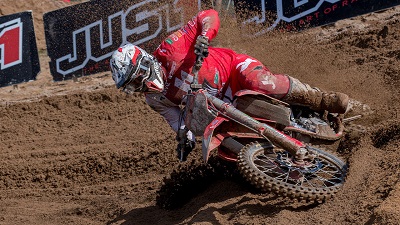 Kevin Horgmo was the only rider of the team that took part in the “Supercampione” race. The Norwegian once again was not the fastest man at the start but his comeback was unceasing and worthy; from the initial 19th place he moved up ten positions and after 18 laps he was 9th at the checkered flag, resulting as the 1st rider of the MX2 class. Thanks to his great performance he moved up to the 12th position in the General Classification. 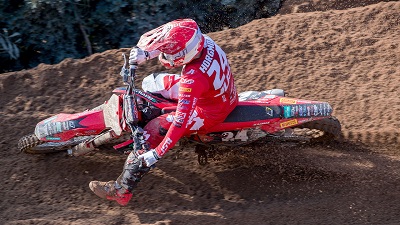 The last round of the “Internazionali d’Italia Motocross” will take place next weekend, on the 14th of March, and the teams and riders will confront themselves in a circuit that is also used in the international races: the “Città di Mantua” in Lombardy.

Alberto Forato #303: “In the MX2 I had some issues at the start, as I violently hit my right arm. Despite that, I finished in 4th place after that I also had to slow down due to the pain. In the Supercampione, I preferred not to start, to avoid making any more damages to my arm. After all, I’m happy with the result and I can’t wait to go back to the track”.